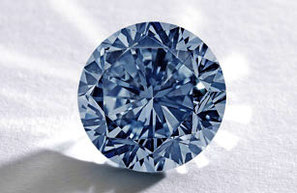 This 7.59-carat fancy blue vivid diamond “embodies the best and rarest attributes of a blue diamond,” Sotheby’s said. The stone will be up for auction Oct. 7 in Hong Kong.

Hong Kong–The largest round fancy vivid blue diamond ever graded by the Gemological Institute of America will be offered for sale when Sotheby’s holds its Oct. 7 sale in Hong Kong.

The Premier Blue is the first significant round fancy blue diamond to appear at auction worldwide, as round brilliant cuts are rarely used in colored diamonds due to the high volume of waste involved in the cutting process, Sotheby’s said.

The diamond will be included in Sotheby’s autumn sale of Magnificent Jewels and Jadeite, and will be previewed in Asia, Geneva, London, New York and Doha, Qatar prior to the sale.

If the stone reaches its estimated price, it will be the most expensive blue diamond ever sold by Sotheby’s. The auction house’s highest-grossing blue diamond to date is an 8.01-carat emerald-cut fancy vivid blue diamond set in a ring that sold for $12.7 million in Hong Kong in April.

The “Graff Pink” diamond holds the world record for any diamond and any jewel sold at action. Diamantaire Laurence Graff paid $46.16 million for the 24.78-carat emerald-cut fancy intense pink diamond at Sotheby’s Geneva in November 2010.

A highlight of the auction is an 8.03-carat cushion-shaped natural pigeon’s blood Burmese ruby, free of inclusions to the naked eye and originating from the Mogok Valley in Burma. Set into a ring and designed by Cindy Chao, the lot is expected to sell for up to $4.2 million.

A set of two jadeite bead necklaces, together made of 254 jadeite beads of matching color, translucency and texture, have a pre-sale high estimate of $3.8 million. The necklace originates from China’s Republican Era, 1911 to 1949, and belonged to a Chinese family. 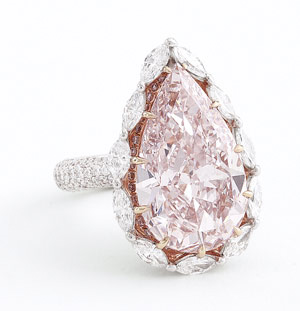 A 10.94-carat pear-shaped fancy light pink diamond, set into a ring and surrounded by marquise-shaped white diamonds, is expected to fetch between $1.9 million and $2.3 million.

Colombian emerald jewelry, Kashmir sapphire pieces and pearl lots also will be included in the auction.

“In celebration of Sotheby’s 40th anniversary in Asia, our selection this autumn is marked by unique pieces of illustrious provenance as well as inimitable style and glamour,” said Quek Chin Yeow, deputy chairman and head of jewelry at Sotheby’s Asia.

Additional information on the auction can be found on Sotheby’s website.